Are you working on a web project in GitHub and want to know the Lighthouse KPIs of your project after each git push? Here's how.

Our goal is to make your Lighthouse results look like this:

1. Use GitHub Actions to build your code

We would like to calculate Lighthouse KPIs from a website that is actually being built and deployed. GitHub Actions[https://github.com/features/actions] is a nice vehicle to execute these steps right on git push.

Let's take this repo as an example. The project contains a small Vuepress demo site.

The .github/workflows folder contains a .yaml that describes the GitHub Actions workflow. Let's go through this file.

2. Deploy it somewhere and store the URL

The next step is to deploy your build results somewhere. In my example project, I use IONOS Deploy Now as the deployment target. Side note: Deploy Now not only provides you with infrastructure, but also helps you setting up your build. This is especially helpful if you are unfamiliar with GitHub Actions syntax.

If you are using Deploy Now, the Deploy to IONOS step of the workflow will, as it says, deploy your website to IONOS servers and provide a URL.

Let's use this awesome GitHub Action to run the Lighthouse test by adding this to your workflow.

If you are using Deploy Now, you can replace https://example.com/ by ${{ steps.project.outputs.site-url }} to refer to the URL your website was deployed to.

GitHub recently announced a nice feature called Job Summaries. They allow you to generate a visual status report in the GitHub UI right after each workflow execution. 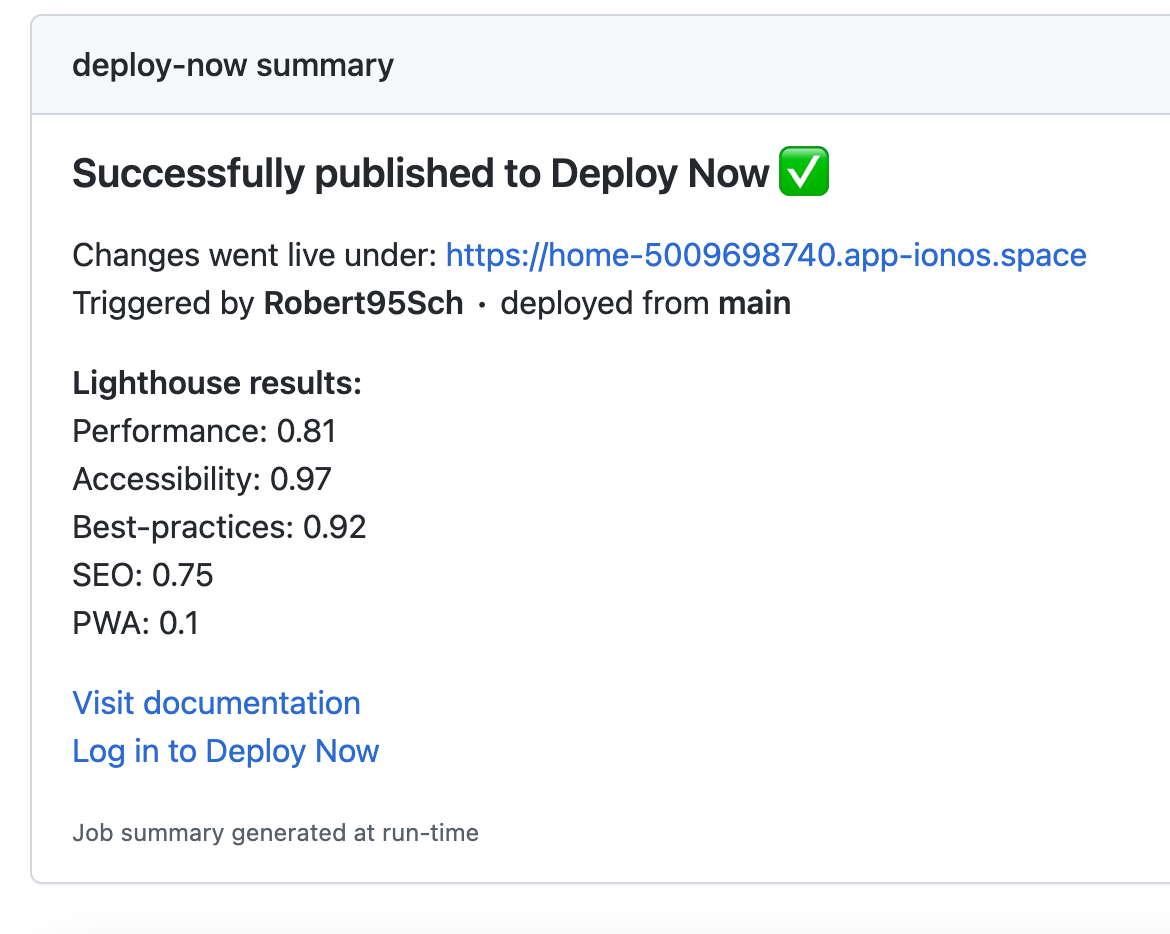 As you can see in the image above, I've decorated it with some additional information. The key point is to insert the correct reference to the different KPIs, e.g. ${{ fromJSON(steps.lighthouse.outputs.manifest)[0].summary.performance }} to be able to print them.

Of course, your Lighthouse tests only make sense if your build and deployment were successful. You might want to add a little status report in case your deployment was not successful:

And that's already it! Enjoy pushing to your repo and check your Lighthouse KPIs after each deployment. And if you like, pay Deploy Now a visit.

What about you? Does this implementation make sense to you?